The Harmonie Foundation has brought a unique program of music instruction to the Czech Republic. The program provides children with free musical training, gives them an opportunity to build an orchestra and become an indispensable part of a community in which everybody has their place.

The program started 40 years ago in Venezuela as El Sistema and since then has been successfully developing in the US, Canada and 24 countries in Europe.
The notion of a socially preventive music education came to the Czech Republic thanks to Milada Cholujová, the founder of the Harmonie Foundation, in 2009. Since then professional musicians have been giving children a chance to promote their abilities, learn how to work in a team and experience joy of music and life, while building an orchestra. Children, regardless of their family or social background, school results or cultural roots, receive as many as 8 hours of free group training in playing a musical instrument a week. Thanks to the project’s approach, methodology and philosophy, its positive impact on children in socially excluded localities has been plain to see. Thanks to this program children are known to have better school attendance, better school results, better concentration and higher self-confidence. The communities into which the project brings music, order and discipline cooperate much better and their attitude to other groups of citizens is more forthcoming. Intense music education and public performances given by children’s orchestras also improve the quality of relations and support within the family.

Everything the Harmonie Foundation brings to children, families, schools, communities and localities is free of charge. Several hours of musical training led by professional musicians, musical instruments, concerts and last but not least adventure, skills, experience, friendship… The values we would very much like to spread to other places, to other children, who would otherwise be roaming the streets, wasting their enormous energy in the wrong direction. 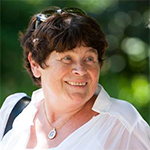 Her experience of the non-profit foundation sector was acquired during her work as the Director of the Prague branches of the CDC (Citizens Democracy Corps based in Washington, DC) and the CIJ (Center for Independent Journalism), two organizations that prepared large-scale educational programs in the Czech Republic. She founded the Harmonie Foundation in the autumn of 2009. 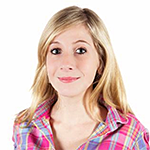 Born in Prague, she studied film, art history and art at the universities in Britain and the Netherlands. She is a co-founder of the Harmonie Foundation, currently working in the film production business.

Member of the Board of Directors of the Harmonie Foundation, she graduated from the Faculty of Philosophy of the Charles University in Prague, English and German studies. She won her doctoral degree by defending her diploma in English linguistics. She worked as an editor of the English Service of the Czechoslovak Foreign Language Broadcasts and then she served at the United States Embassy in Prague, first as a media analyst, later as a political analyst. She also worked as the Executive Director of the non-profit organization Ferdinand Peroutka Endowment Fund and as the PR and Student Recruitment Director at the Anglo-American University in Prague. After a short spell in the non-profit organization Život90 she served as a press secretary of the Czech Republic’s Attorney General, and then as the spokesperson of the Attorney General’s Office in Brno and of the Ministry of Culture.

At present she works as a political analyst at the United States Embassy in Prague. 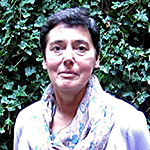 She was born in Prague, after leaving the Secondary School of Economics (foreign trade) she was employed in clerical jobs – as a secretary at the Czech Technical University, the Czech Agricultural University, and in the Trade Research Institute. She also received hands-on experience as an assistant in the Secretariat of the Czech Ministry for Trade and Industry and in the company TMF, where she served as an archivist. She came into contact with the non-profit sector while working for the Prague branch of the CDC (Citizens Democracy Corps based in Washington, DC) and the CIJ (Center for Independent Journalism), organizations that prepared large-scale educational programs in the Czech Republic. She has been with the Harmonie Foundation since 2012. 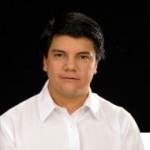 Conductor and founder of the Municipal Youth Orchestra. An El Sistema student and its “missionary” in Europe, he co-founded programs in Turkey, Slovenia and Austria. Artistic director of the Harmonie Foundation.

Lenka Dandová has applied herself to music since her early age. She began her music training at an elementary art school in Žatec, studying singing and piano playing. She later devoted herself to chamber singing and four-hand piano playing. She regularly attended competitions and carried off awards. After finishing her studies at the secondary school of teacher training in Most she was admitted to the Charles University in Prague in the following study branches: Choir Leading (Jaroslav Brych), Piano Playing (Vít Gregor) and Music Education. During her university studies she took private lessons in solo singing and orchestra conducting. In 2010 she received the “Talent of the Year“ award and conducted the Prague Chamber Philharmonic at the concert of laureates. In addition to her teaching, choir leading and conducting career she also sings with leading Czech choirs. 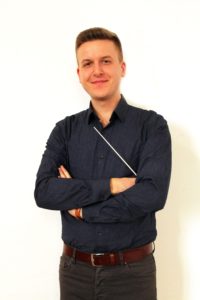 Roman Maďar is an undergraduate studying conducting at the Music and Dance Faculty of the Academy of Performing Arts in Prague under the tutelage of Associate Professor Tomáš Koutník, Mgr. Norbert Baxa, Associate Professor Leoš Svárovský and Mgr. Professor Ivan Pařík. Roman Maďar made his debut as a conductor back in 2012 with the Big Wind Orchestra and the female choir ”Cecilka“ at Medzeve. While conducting the Wind Orchestra, attached to the House of Culture in East Bohemian town of Holice, he performed the world premiere of a composition written by Swedish composer Kristoffer Sandasa. In June 2015 he debuted with the Academic Orchestra of the Academy of Performing Arts. Between 2015 and 2017 he served as the principal conductor and choirmaster of the choir and chamber orchestra of the Trinitarian Church in Bratislava. Since 2016 he has been the principal conductor of the 100-member orchestra of the Association of Slovakia´s Wind Orchestras, regularly holding – together with this ensemble – Creative Workshops for talented children and youth from all corners of Slovakia. Since 2016 Maďar has also been conducting the Bratislava Festival Orchestra. In 2016 he was an assistant conductor in the opera studio at Prague´s Music and Dance Faculty. In the following years he served as an assistant to Dušan Štefánek in the opera studio of the Academy of Performing Arts. In April 2017 Roman Maďar made his debut with the Slovak Radio Symphony Orchestra. In July 2017 he attended the master course of the London Masterclasses in Manchester under the tutelage of Benjamin Zander. In 2018 Maďar cooperated with the Young Opera Prague company. He regularly performs with the North Bohemian Philharmonic in Teplice where – as part of his studies at the Music and Dance Faculty – he attends the master courses under the tutelage of Associate Professor Tomáš Koutník. He debuted with the orchestra Academic Chamber Soloists in April 2018. In October 2018 he conducted the Opera Studio Prague in a performance called “Anne, Looking Skywards without Fear”. 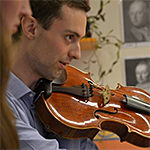 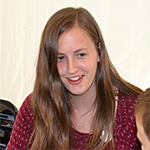 She grew up in the United States where she joined the Junior All-State Orchestra based in Moline, Illinois at the age of 12. Then she took private viola lessons in South Dakota. For four years she played in the South Dakota All-State Orchestra and was a member of a youth orchestra – the Sioux Empire Youth Orchestra (SEYO). Besides the viola, she also played the euphonium until the age of 18, and for four years she performed in the All-State Band, serving for one year as its head. At the age of 18 she was admitted to the Prague Conservatoire where she has been studying the viola for five years now. She attended the summer courses in Telč and Dobřichovice given by world-famous music teachers. At present she is first viola player in the Iwasaki Symphony Orchestra as well as in the Prague Conservatoire’s Symphony Orchestra. 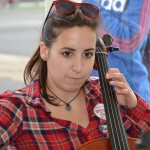 She began playing the cello at the age of 5 under Marie Eiblová. She attended many competitions, both as a soloist and in chamber ensembles. She was a member of the Violoncello Ensemble of the ZUŠ Český Krumlov, an ensemble that has received many awards in the Czech Republic and abroad. She graduated from the Prague Conservatoire having studied in a class of Professor Tomáš Strašil. To date she has attended several cello master courses, for instance in Soběslav.