COME AND PLAY WITH US. THE HARMONIE FOUNDATION´S INVITATION TO VISIT PRAGUE´S STŘELECKÝ ISLE

After a very successful first year when some 150 musicians got together on the stage for a concert, you can once again come to play at an open-air concert in Prague’s Střelecký Isle and join a children’s orchestra in the accompaniment of both professional and amateur musicians (to be held on May 21). Anyone can take part, anybody who plays a musical instrument and who feels like performing in an orchestra under the baton of two conductors: Chuhei Iwasaki and Jiří Korynta. Ivo Kahánek, an outstanding Czech pianist and patron of the Harmonie Foundation, as well as violinist Josef Špaček will also perform at the concert. It will be for the first time this year that young musicians will have a chance to play together with these renowned Czech soloists.
“Children are like mushrooms – everything they absorb remains in them. Developing children’s talent has nothing but positives; parents do not have to fear that their kids will get bored and start roaming about the streets not knowing what else to do. So, let’s start to develop the talents of our kids even though they may not grow to be great artists, new Werichs or Janáčeks instantly,” says Czech actress Simona Stašová, patron of the Harmonie Foundation.
Some other performing artists will partner the Harmonie Foundation’s approximately 60-member children’s string orchestra. Any of you, regardless of your age, can join in and play with the orchestra, i.e. anyone who will master a selected repertoire, which is available at this Internet address: www.nfharmonie.cz . Compositions by Modest Petrovich Mussorgsky, Johannes Brahms, Georg Händel, Bedřich Smetana or Wolfgang Amadeus Mozart will be heard at the concert.
The concert is organized by the Harmonie Foundation, an institution that has brought to the Czech Republic the unique El Sistema project of music instruction. El Sistema-inspired programs make it possible for all the children without any differences to learn how to play a musical instrument, while jointly building an orchestra and becoming and indispensable part of a community where everyone has his or her own place. This project emerged in Venezuela 40 years ago and since then it has been successfully developed in the United States, Canada and in 24 European countries. The idea of socially preventive music instruction came to the Czech Republic in 2009 thanks to Mrs. Milada Cholujová, founder of the Harmonie Foundation.
“The purpose of our annual open-air concert is to lay down a tradition for professional as well as amateur musicians to perform together, a tradition designed to support the old local saying: “Each Czech a musician“. This is a truly unique event during which we want to offer the largest number of people an opportunity to play together in an orchestra, to experience real pleasure from music and to give people a chance for an unusual experience to be derived from this exceptional event,“ Mrs. Milada Cholujová, the founder of the Harmonie Foundation told us.

On Sunday May 21, the Harmonie Foundation held the second year of its successful open-air concert under the title “Come and Play with Us“. Taking part in the joint concert was the brilliant Czech pianist Ivo Kahánek, violinist Josef Špaček and the patron of the whole event, actress Simona Stašová.
These three, along with a children’s orchestra plus a host of professional and amateur musicians, welcomed Prague citizens who felt like playing in public or simply enjoying a lovely afternoon in the open air in the charming environment of Prague’s Střelecký Isle.
“I dare say that with this concert we have established a tradition of joint playing by professional and amateur musicians in the spirit of the old-age saying “Each Czech a musician“ and drawn into our public performance people not only from Prague. An added extra is a chance to meet our distinguished patrons,” explained the founder of the Harmonie Foundation, Mrs. Milada Cholujová.
At this Sunday concert, these partners included the piano virtuoso Ivo Kahánek, the leading Czech violinist and concertmaster of the Czech Philharmonic Orchestra Josef Špaček and last but not least actress Simona Stašová.
The core of the orchestra is an approximately 60-member children’s string ensemble made up of the Harmonie Foundation Orchestra, joined by many other child musicians from the Czech Republic and professional performing artists. The interesting thing is that virtually anyone could take part in the concert regardless of age. The only condition was an ability to play a musical instrument and manage a given repertoire.
“The concert itself started at 3:00 p.m. He who wanted to play with the orchestra had to come to Střelecký Isle shortly after noon not to miss a dress rehearsal. The concert program included compositions by Modest Petrovich Mussorgsky, Johannes Brahms, Georg Händel, Bedřich Smetana or Wolfgang Amadeus Mozart. The whole concert was conducted by Chuhei Iwasaki and Jiří Korynta,“ Milada Cholujová told us.
The concert was organized by the Harmonie Foundation, an institution that has introduced into the Czech Republic this unique project of music instruction. It offers an opportunity to all the children without any differences to attend courses in playing a musical instrument, help in building an orchestra and grow to be an indispensable part of a community where everyone has its place.
The project originated 40 years ago in Venezuela and since then it has been successfully promoted in the United States, Canada and in 24 European nations. The idea of this socially preventive project of music instruction came to the Czech Republic back in 2009 thanks to Mrs. Milada Cholujová, the founder of the Harmonie Foundation.

This year’s “Letňák“ – Summer for Praguites on Střelecký Isle – has just got under way with its first event and its program continues in the coming days.

“Its Grand Stage will offer a sample of programming diversity. On Sunday May 21 we would like to invite big and small musicians, who are keen on playing with an orchestra in public, to a concert held by the Harmonie Foundation and entitled “Come and Play with Us!“

COME AND PLAY WITH THE HARMONIE FOUNDATION

A school orchestra at the Kořenského elementary school has been playing for several years now. It was established at that school by the Harmonie Foundation. Now the children will appear at a major concert on Střelecký Isle in Prague. Anyone can come and join in.
The second year of the joint playing called “Come and Play with Us!“ will begin at 3:00 p.m. on Sunday, May 21 on Střelecký Isle. Virtually anybody who plays a musical instrument, who is fond of singing and who can master a given repertoire is free to attend the open-air concert. The note score can be downloaded in advance from the Harmonie Foundation’s website at this address: www.nfharmonie.cz. Those who won’t play but only come for their listening pleasure will be treated to compositions by G. Händel, Mozart, Smetana and Dvořák.
By holding such joint musical performances the Harmonie Foundation has established a new tradition for both professional and amateur musicians to play together in the true spirit of the saying “Each Czech a musician“. Members of the top Czech symphony orchestras, the piano virtuoso Ivo Kahánek, a patron of the Harmonie Foundation, and Josef Špaček, a leading Czech violinist and the Czech Philharmonic Orchestra’s concertmaster, accepted an invitation to attend. A special guest of the program will be another patron of the Harmonie Foundation, Czech actress Simona Stašová.
The Harmonie Foundation is based on the principles of the system of music instruction known as El Sistema. José Antonio Abreu, a Venezuelan conductor, pianist, economist and politician, founded this project in an effort to give all the children regardless of their origin or the social status of their families an opportunity to devote themselves to music.
Years ago, Venezuela’s El Sistema project had inspired some other countries, and its positive impact can be documented by many excellent results. “Such orchestras were established in six poorest regions in England. They have evidence that children turn out to be better achievers also because it has been proved that playing a musical instrument activates parts of the brain, which would otherwise “sleep,“ explains Mrs. Milada Cholujová, the founder of the Czech Republic’s Harmonie Foundation, and adds findings from the American city of Boston. At the start of the project in one of Boston’s underprivileged areas, a mere 9.5 percent of the local schoolchildren planned further studies, at the end of the project a full 55 percent of the children wanted to go on studying. “Music and being a part of an orchestra shape children, giving them self-esteem that they can achieve and do something, while opening up new horizons that show them what they could do in their future lives. And it does not necessarily have to be only music,“ she concluded. 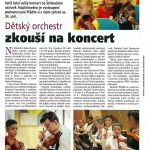 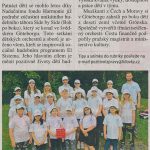 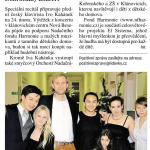 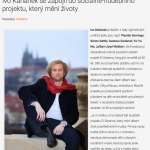 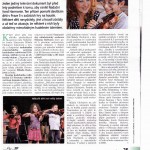 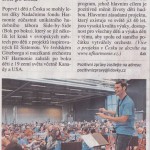 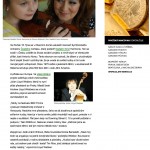 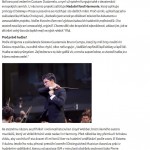