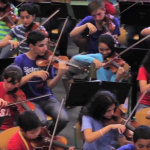 Bruno – ”a licensed missionary” of the El Sistema Europe Network, himself attended this particular project in Guatemala: ”I have become SOMEBODY OUT OF NOBODY!”, he says. He helped during the establishment of such projects in Turkey, Croatia, Slovenia, Austria (he conducts the Viennese El Sistema-inspired orchestra). In 2014 he helped also children here in the Czech Republic to ”launch ... END_OF_DOCUMENT_TOKEN_TO_BE_REPLACED